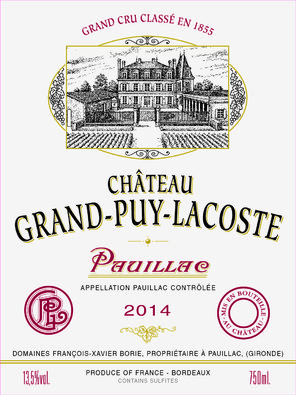 The Château Grand Puy Lacoste 2014 is a blend of 82% Cabernet Sauvignon and 18% Merlot between 25 September and 9 October at 33 hectoliter per hectare. The aromatics are not as immediate as the Haut-Batailley and demand more coaxing from the glass, but that comes with the territory. It unfurls with each swirl, black fruits at first, then GPL's trademark, graphite and gravel scents storm into the room. Leaving the glass aside for 10 minutes there is a distant tang of shucked oyster shells. The palate is understated on the entry. This is not a powerhouse Grand-Puy-Lacoste, rather one that emphasizes finesse and precision. It is almost unerringly low-key and yet there is an enormous length already in place. As usual, I suspect that its secrets (or at least some of them) will be unlocked during its barrel maturation. One of the appellation's most cerebral offerings.